Mick Antoniw AM joined members of the Wales ParaCheer squad to support the team at this year’s Sunday Times Sportswoman of the Year Awards where they were up against the England Rugby and Cricket teams (the eventual winners) amongst others.  Wales Paracheer were the only team nominated for Wales.

“This is another fantastic achievement by this relatively new team, who have already won gold at the World Championships.  To be recognised alongside established teams such as the England Rugby and Cricket teams is a remarkable achievement.  Many of the squad are from Taff Ely and it’s been great working with them over the last year.  I’m sure they’ll continue to make us all proud for many years to come.”

“It is a great honour for us to be nominated alongside such brilliant sports teams. We are so proud of all our athletes both disabled and non-disabled for their consistent pursuit of success. We are over joyed that cheerleading, specifically Freestyle Pom, has been recognised by the Sunday times and Vitality Sport team of the year and thank them for it.”

“Sport and Dance have been a key part of my life since I can remember. I’m so luck that Freestyle Pom has opened up many doors for me and I am proud to call myself a World Champion Gold Medallist, something that all of my friends are very envious of. I often find it difficult to connect with people due to my differences but being part of Team Wales has allowed me to grown as a person, making new friendships along the way. This team was a great way for everyone to learn about different disabilities and I’m very proud that it has been recognised at this event.” 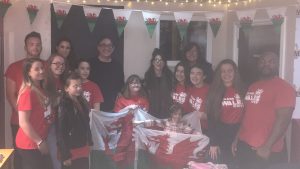