Ex-miners in Coedely, Tonyrefail are celebrating the rediscovery of their long-lost lodge banner after thirty-four years.

A search was instigated earlier this year for the hand-made banner, which had been a prominent feature at marches and miners’ galas since the early 1960’s and was eventually found in an ex-miner’s attic, boxed and in excellent condition. 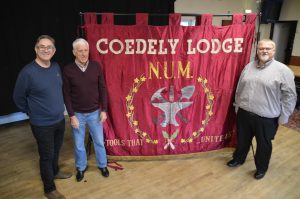 “I’d seen numerous posts on social media from people asking where the banner was and people began asking me about it in the street.  The last time I could recall the banner being used was in 1985 when we proudly marched back to work at the end on the miners’ strike.   For miners, the banner is an important part of our heritage, so I decided to put the word out that the search for the banner was on.”

The banner which bares the legend ‘Security comes with Socialism’ was eventually found by Mike Banwell, a former lodge chair.  Mike said:

“I had no expectation that we’d find the banner, so I was thrilled to find it in such great condition.  The moment I opened the box I was immediately taken back all those years to events and marches across south Wales.” 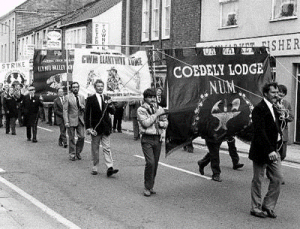 “This beautiful, hand-painted banner a symbol of the community heritage and pride, so discovering the Coedely lodge banner is an important event for all ex-miners and the wider community in Tonyrefail.  The plan now is to find a suitable permanent home for the banner, where it can be appreciated by the whole community for generations to come.”

The discovery of the banner has been the catalyst for a reunion of Coedely miners, which will take place at the Ely Valley Miners Club, Tonyrefail on 17th January, where all former Coedely miners will be welcome.

The reunion will be sponsored by the South Wales NUM, whose Secretary Wayne Thomas said:

“It is wonderful that this part of Coedely and the NUM’s history has been found.  I know how much it will mean to all the miners and their families.  The South Wales NUM will be proud to sponsor this event, which will bring many old comrades together.

“Discoveries such as this are really important and I would ask any former miners, their family members or members of the public who come across important historical artefacts such as this to get in touch with me at the South Wales NUM on 01443 404092.  We would be grateful for any contributions that we can then preserve as part of our proud mining history.”