HomeLatest NewsFeaturedTOGETHER FOR A TRANSPORT REVOLUTION

TOGETHER FOR A TRANSPORT REVOLUTION 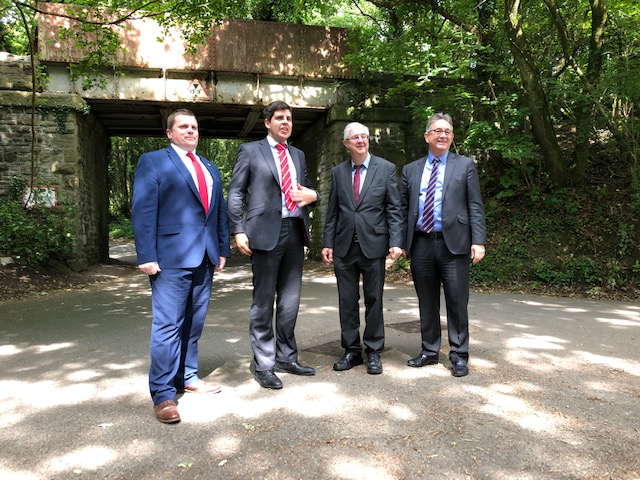 Mick Antoniw, Assembly Member for Pontypridd has joined forces with Mark Drakeford, Assembly Member for Cardiff West and the Leaders of Rhondda Cynon Taf and Cardiff Councils on a plan bring the disused rail line from Llantrisant to Cardiff back into use as part of the South Wales Metro.

A £135,000 study will be commissioned and completed over the next four months, which will then inform a strategic outline business case.  It could see around twelve miles of disused rail lines being utilised to provide a public transport corridor from Pontyclun to Cardiff, travelling through Talbot Green, Llantrisant and Creigiau with potential for a spur to Beddau.  If the project is given the go ahead, it will see the creation of a rapid, environmentally friendly and sustainable alternative to the increasingly pressurised road network.

“I have long campaigned for Taff Ely to be part of the Metro project and it is great news that this first important step in now underway.  The Metro has the potential to revolutionise public transport provision and would be the most significant infrastructure investment in this part of Taff Ely since the opening of the Church Village bypass.   If we are to persuade people to use their car less then we have to offer a safe, reliable and sustainable alternative.  A direct Metro line from Llantrisant to Cardiff will provide all of this, whilst also helping to protect our environment for future generations.”

Commenting on the plan, Mark Drakeford AM said:

“As our city grows, this project will offer residents a clean, efficient and modern means of commuting into Cardiff, reducing the impact of road use on the environment and improving people’s well-being. It would serve the new developments in north west Cardiff, existing communities in places like Fairwater and Canton, as well as people commuting into Cardiff from Rhondda Cynon Taf.  I have always argued that the growth in population in Cardiff West must not outstrip the infrastructure required. I am determined that the best possible transport infrastructure will be a central part of the continuing transformation of our city and the wider South Wales region, which is why I’m backing this ambitious and hugely exciting plan.”

The initial phase of work is being commissioned through Transport for Wales by Rhondda Cynon Taf Council on behalf of RCT, Cardiff Council and Welsh Government – all of whom are contributing to the costs.  Consultants Mott MacDonald will undertake the work and will identify a short-list of public transport solutions, which may include light rail and rapid bus options, by October 2019.

“This development has the potential to have a transformative effect on transport options to and from the central Taff Ely area in providing a direct public transport route to Cardiff, which will satisfy the significant demand that currently exists in the area with a number of residents commuting to the city for work.  In addition, the project has the potential to act as a catalyst for growth in the Talbot Green and Llantrisant area, which will become a hub for economic activity matching its status as a Strategic Opportunity Area in the Wales Spatial Plan. It will help attract jobs into the area and provide sustainable options to access those jobs.

“Rhondda Cynon Taf is set to be one of the main beneficiaries of the South Wales Metro project once it is completed and I am pleased to see such support for this scheme, which could form a significant further part of a future phase of the Metro.  The Metro will bring significantly improved trains, more efficient services and a greater number of journeys once rolled out, and this is no less than our communities deserve.  Improving our public transport infrastructure remains a core priority for the Council, and we will continue to work with the Welsh Government and our neighbouring Authorities to ensure these are delivered.”

“The Cardiff Capital Region is the country’s economic engine, with Cardiff alone creating 20,000 new jobs last year for the Welsh economy. However, future prosperity relies on an effective transport infrastructure to connect people with the opportunities being created across the region.

“The delivery of the Metro, alongside our recently announced £1bn transport vision for Cardiff, could fundamentally reshape the transport infrastructure for the whole region.”